Nineteenth-century
psychologists introduced
the term
degenerate or "entartete"
to describe any deviance or
clinical mental illness.
Later a broader definition
was applied to include
scientific literature
(medical, biology
and anthropology).

By 1933
Hitler's Third Reich
referred to the
mentally ill,
communists,
Gypsies,
homosexuals
and Jews
as subspecies of the
human race.

Hitler envisioned
the day when German culture
would be free of
"morbid excrescencies
of insane
and degenerate men."

Painting, Sculpture, Architecture and Music
in the Third Reich
Has history been tampered with?


Learn how and why Ancient Rome, Greece and Egypt were invented and crafted during Renaissance. Discover the Old Testament as a veiled rendition of events of Middle Ages written centuries after the New Testament. Perceive the Crusaders as contemporaries of The Crucifixion punishing the tormentors of the Messiah. What if Jesus Christ was born in 1053 and crucified in 1086 AD?

Sounds unbelievable? Not after you've read "History: Fiction or Science?" by Anatoly Fomenko, leading mathematician of our time. He follows in steps of Sir Isaac Newton, finds clear evidence of falsification of History by clergy and humanists. Armed with computers, astronomy and statistics he proves the history of humankind to be both dramatically different and drastically shorter than generally presumed. 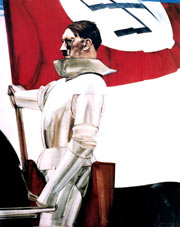 Art was considered to be one of the most important elements to strengthening the Third Reich and purifying the nation. Political aims and artistic expression became one. The task of art in the Third Reich was to shape the population's attitudes by carrying political messages with stereotyped concepts and art forms.
True art as defined by Hitler was linked with the country life, with health, and with the Aryan race. "We shall discover and encourage the artists who are able to impress upon the State of the German people the cultural stamp of the Germanic race . . . in their origin and in the picture which they present they are the expressions of the soul and the ideals of the community."(Hitler, Party Day speech, 1935)

MODERN ART HAD NO PLACE IN THE THIRD REICH


Artists banned by the Third Reich:


Artists favored by the Third Reich:


Hitler, who, ironically, had been rejected twice from Vienna's Academy of Fine Arts, eagerly assumed the role as the ultimate art critic - deciding the fate of all art objects that existed in occupied countries.

The years 1927-37 were critical for artists in Germany. In 1927, the National Socialist Society for German Culture was formed. The aim of this organization was to halt the "corruption of art" and inform the people about the relationship between race and art. By 1933, the terms "Jewish," "Degenerate," and "Bolshevik" were in common use to describe almost all modern art.

In 1937, Nazi officials purged German museums of works the Party considered to be degenerate. From the thousands of works removed, 650 were chosen for a special exhibit of Entartete Kunst. The exhibit opened in Munich and then traveled to eleven other cities in Germany and Austria. In each installation, the works were poorly hung and surrounded by graffiti and hand written labels mocking the artists and their creations. Over three million visitors attended making it the first "blockbuster" exhibition. 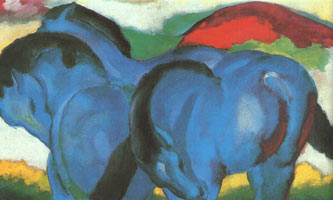 Hitler's process of "purification" began with raids on museums and galleries in which impressionist and abstract paintings, drawings, and sculptures were removed. The Nazis were as passionate about their contempt for "unacceptable" art as they were practical. While almost 5,000 pieces were burned, works by renowned artists such as Picasso that were likely to fetch high bids on the international art market were auctioned off in Switzerland to raise money for the Nazi party.

Bach, Beethoven, Brahms, Wagner, Haendel… This rich musical heritage was used by Hitler to promote Aryan superiority. His ideas concerning music and art shaped the cultural atmosphere and political policies for all of Germany. All compositions written by Jews or by those persons suspected of being sympathizers were banned.

Like their counterparts in the Arts, musicians were trying to express through music the world around them. Any music that demonstrated abstract expressionism, jazz, or experimented with "atonality" was prohibited and labeled "entartet" or degenerate.

After the race laws of 1933, the Reichsmusikkammer (Reich Music Chamber) required a registry of all German musicians. As a result, hundreds of talented composers had their work deliberately suppressed and careers ended simply because their race or style of music offended the Third Reich. By 1938, examples of degenerate music were on display at the Entartete Musik Exhibit for the public to view. Famous works by Mendelssohn, Mahler, and Schoenberg were used as examples of unacceptable music. A generation of incredibly innovative and promising musicians was virtually excluded from its place in music history.

Sculpture expressed the National Socialist obsession with the ideal body and espoused nationalistic, state approved values like loyalty, work, and family. Josef Thorak and Arno Breker were the most famous sculptors of the Nazi regime. Sculpture was also used increasingly with Architecture to embody the "German Spirit" of divine destiny. Some of the best examples of sculptures made for Hitler are in front of the Olympic stadium.

Arno Breker was in a certain sense both the best and the worst of the Nazi artists. Nominated as official state sculptor on Hitler's birthday in 1937, his technique was excellent, and his choice of subject, poses, theme were outstanding. Breker uses his numerous "naked men with swords" to unite the notions of health, strength, competition, collective action and willingness to sacrifice the self for the common good seen in many other Nazi works with explicit glorification of militarism.

Josef Thorak was one of two official artists for the Third Reich. He was given a huge studio near Munich in 1938. It was here that he worked on his large pieces, some as tall as sixty-five feet. His horses were destined to be placed at the Nuremberg Stadium.

Architecture was Hitler's favorite art form. He viewed himself as the "master builder of the Third Reich." Among the surviving examples of Nazi architecture is the Olympic stadium complex in Berlin.

The Olympic games had been scheduled before Hitler came to power in 1933. He saw this event as a unique opportunity to play host to the world and to show Germany as a force to be reckoned with. He wanted Germany to be portrayed in the best possible light and removed all antisemitic slogans that had defaced the walls of public buildings. The stadium was built as a huge assembly place for hundreds of thousands of people to celebrate Nazi rituals. The art that accompanied this colossal building was no less magnificent. 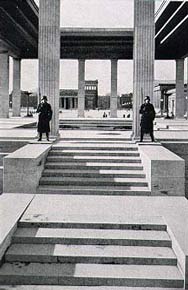 While working together, Hitler and Speer developed close ties of friendship. Hitler admitted Speer to his inner circle, opened up intoxicating new fields of action for him, and in the course of time allowed him a measure of freedom that no other member of Hitler's entourage ever enjoyed. Speer, in turn, gave Hitler outstanding service and complete loyalty - and grand offices, stadiums, palaces, and new cities.


Read more about the Aryan Ideal
and Richard Wagner!

Hitler was decidedly against any music that did not have the Teutonic overtones of Wagner and Bruckner. State sanctioned music had to sound German.

Richard Wagner (1818-1883) was Hitler's favorite composer. During World War I, it is reported, he carried Wagner's music from Tristan in his knapsack. Often Hitler had Wagner's music performed at party rallies and functions. Wagner's music was uncompromisingly serious, and intensely Teutonic.

Most musicians and composers who lived during the Third Reich were less fortunate in their ability to please the Führer. For many musicians, survival meant compromise.

Herbert von Karajan (1908-1989), a wealthy gifted musician and conductor, was the youngest director of an opera company in Germany in the 1930s. In order to obtain better conducting positions, Karajan joined the Nazi party where it was rumored he bought some of his appointments. After the war he was banned from conducting until 1948. He became the permanent director of the Berlin Philharmonic Orchestra in 1958 and was considered one of Europe's most popular conductors.

Clemens Krauss (1893-1984) was an accomplished opera conductor. He was a favorite of Hitler, though he was not a Party member. Krauss became a captive of Hitler's music ministry. Though he tried to be transferred to Vienna on numerous occasions, Hitler insisted that he work in Munich.

Richard Strauss (1864-1949) was appointed president of the Reichsmusikkammer (Reich Music Chamber) when Hitler came to power in 1933. Strauss accepted it as a way to get legislation passed which would benefit "serious" composers in a country he felt had become too commercial in its musical taste. His primary interest was purely musical, whether or not a person was Jewish was irrelevant to him. He regularly refused to fire Jewish musicians and continued to work with Jewish librettist, Stefan Zweig.